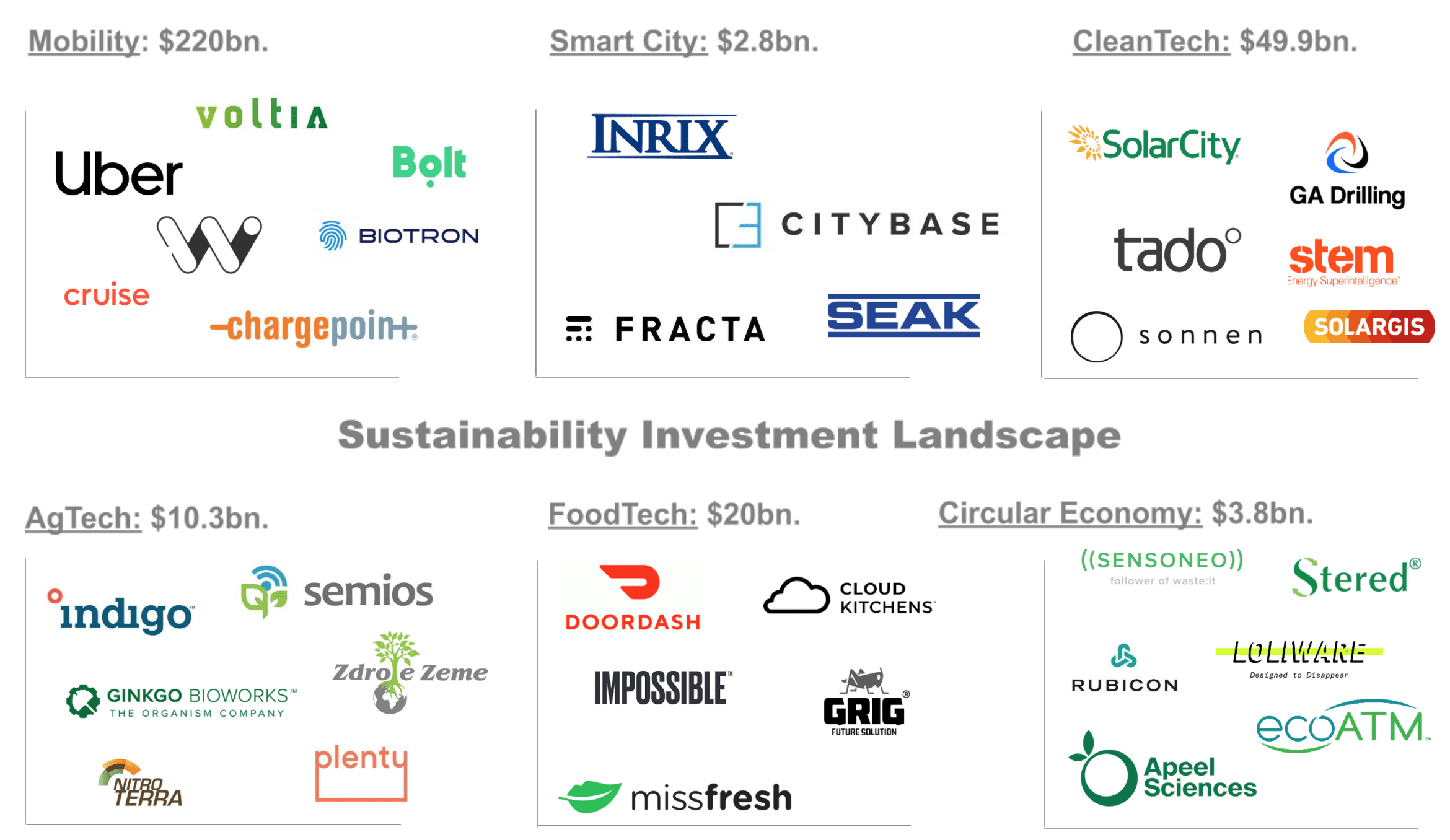 Depletion of natural resources has been an ongoing trend for decades. With an increase in global temperatures and a number of droughts, floods and famine growing around the world, it is obvious that this trend is unsustainable.

That’s why Challenger Accelerator sources the best talents and startups from Central Europe, which are laser-focused on tackling major sustainability issues.

To disentangle the overgeneralized term, we dissected  “sustainability” into six major segments of Mobility, Circular Economy, Agtech, FoodTech, Cleantech, and Smart Cities. As you’ll see later in the article, growing numbers of newly founded startups, as well as rising investment levels across each of the segments, show great potential to stop or even to revert the negative trends. Moreover, it is a good business opportunity too!

Starting with the largest segment, the mobility industry is also one of the most complex ones as it currently stands on the nexus of multiple key trends, such as electrification, autonomous driving, interconnectivity, and platformization.

According to McKinsey, the consultancy, investors poured an immense amount of $220 billion between 2010 – 19. The investments were made into 1,100 startups across all verticals, out of which the top three are : E-hailing  ($56.2 bn.), semiconductors ($38.1 bn.) and autonomous vehicle sensors and components ($29.9 bn.). On the other side, currently the smallest subsegments of the mobility industry are human-machine interface ($7.4 bn.), back-end / cybersecurity ($9 bn.) and telematics ($12.4 bn.).

Not every product or its package is garbage! Circular economy is based on a concept of closed loops, when used materials are returned back into the production cycle to prevent unnecessary waste.

Only one third of all waste was recycled in the EU in ‘16 and the situation is not better in other regions. Be it recycling or smart waste management startups, luckily there are plenty of well funded companies working hard on reverting this trend.

The startup database of Crunchbase records ~ 400 startups (193 waste management, 179 recycling) with a total funding of $3.8bn.

Investments into startups making sure that soil can grow enough food to accommodate 10 billion people in 2050 have been growing modestly but the upward trend is accelerating.

AgTech comprises subsegments like plant and animal science, farm sensors, imagery, precision agriculture, crop protection and input management, indoor agriculture and marketplaces. Out of these, the largest subsegment is crop protection that keeps its dominant position among investors since 2014. A bright future lies ahead of indoor agriculture, which is the fastest-growing subsegment with investments doubling between 2018 and 2019 when it reached a new height of $550mil.

Contrary to its sister market, AgTech, investments into startups on the FoodTech market decreased from $8.7bn to $7bn during the last year.

According to Finistere, a VC company, investors provided more than $20bn spread across 1,300 deals since 2010.  FoodTech comprises a wide range of subsegments, such as consumer oriented meals and beverages, alt protein / dairy, delivery and marketplace. Out of these, e-commerce ($2bn in ‘19) and delivery ($1.5bn in ‘19) are the largest ones and make up for almost half of the entire market.

An overarching and ambiguous term CleanTech includes startups reducing the negative impact on the environment. Therefore, there are some obvious overlaps especially with companies from AgTech and the Circular economy.

To narrow this term down, we see CleanTech as a market with companies and technologies harnessing renewable energy sources and curbing emissions and waste. As such, it included 2,044 companies with a total funding amount of almost $50 bn in ‘19. However, it is necessary to say that these numbers also include mature companies and their IPO and M&A data. Looking specifically at startups, there have been 478 companies with $10.4 bn invested.

2019 has been a record year for CleanTech with $16 bn raised. On the other hand, growing market maturity is obvious as there were less than 20 new companies officially founded, which is less than a quarter of its past peaks in 2007.

Tracxn, a data company, shows around 650 companies with a total of  $2.8 bn raised. The investment flow keeps growing steadily, when it doubled between 2016 and 2018. The main region for smart city funding remains Europe ($1.3bn) closely followed by the US ($1.1bn).

* Disclaimer: For the purpose of this article we looked at the general investment trends and identified examples of companies for each segment. Although we did our best to maintain a principle of mutual exclusivity among the individual segments, there is a possibility of some overlaps and inaccuracies. We are sorry for that.